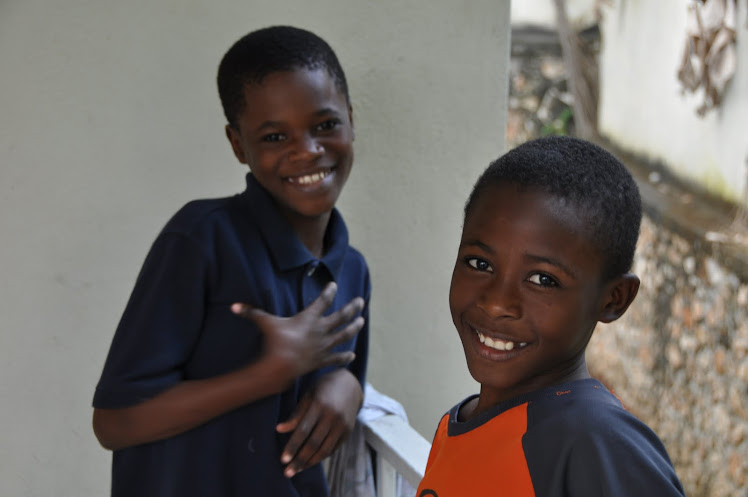 Here are a couple of the boys from HCRM! (left: Jeff, right: Jean Jieve)

Dormitories are currently in progress at the new HCRM site.  These dorms will provide safer/roomier places for the children of HCRM to live.  We are also hoping to build a cafeteria building, that will serve as a community area for the children, as well.

More updates regarding this building project will be posted soon....

As of this past fall, we had 4 more Haitian children come home!!!  Katiana, Jamesson, Jhovanny, and Kimberlie!! :)  We are so excited to have them home, and ask continued prayers for their strength/growth as new American citizens.  Prayers for those still waiting to come home, for their families, and for the cooperation of the Haitian and American governments, as well.

We will rejoice in their return!!
Posted by Clay at 10:43 AM No comments:

In honor of the anniversary of the earthquake that struck Haiti 2 years ago.

For anyone following this post, there is good news on the horizon!! Paperwork is beginning to move a little, and the hope of coming home is beginning to burn brighter! Please keep the children of Haiti that waiting to come home in you thoughts and prayers over these next few months.

Although the tragedy of Haiti's disaster has faded in our minds, the reality of it has worsened for the people of Haiti, who seem to have to relive the nightmare everyday. Many nations continue to try to supply aid to this (what seems to be at times) hopeless situation, but God continues to shed light on the HOPE that rises from the rubble. The cry of a newborn, the giggles of little children on their way to school, and the peaceful sigh of an elderly man as he rests his weary bones in the doorway of his patched up house. The people of Haiti are strong and courageous. They are heroes and survivors... but most of all, they are His. :)

Moving Along in His Time

Our team is making progress in our steps to becoming a successful non-profit organization. The new non-profit is called "Haiti N.O.W.", and we are dedicated to the construction of the new HCRM Village outside of Port-au-Prince, Haiti. In order to provide Haiti Children's Relief Mission with new facilities and opportunities, we must work towards raising $750,000. Yes, this is a HUGE mountain to climb, and right now, we're at the bottom looking up and getting a little dizzy. In the end, however, it is about the children. A new facility would allow for at least a hundred and fifty more orphans/displaced children to be taken in and cared for under Christ's name, educated, and given good medical care! This new Village would open up multiple job opportunities and job training for the local Haitians. Our goal in all of this is to meet them in the middle. If they put in the hard work, we want to make sure they have the opportunity to fulfill their dreams. Whether it be to continue education, become a doctor or teacher, or just provide food for their families, Haiti N.O.W. wants to be apart of their tomorrows and work toward creating a better tomorrow for the Nation of Haiti. If you can donate time or money toward this cause, feel free to visit our Facebook page by searching "Haiti N.O.W.", or by following this blog. Donations are tax deductible and can be mailed to: P.O. Box 1341, Spring Branch, TX 78070. Our website is currently in the works, so prayers for its completion are very appreciated! God bless each of you wherever His calling takes you. Please deeply consider the children and people of Haiti and what you could do for them.

Thanks for stopping by!!! :D 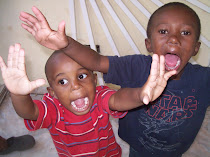 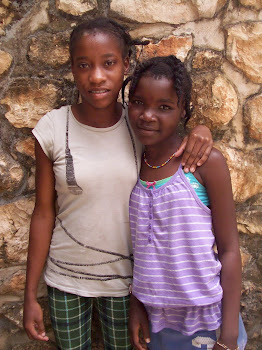 For the Children who are available for adoption and desperately long for a forever family...
For the Children of the families who are in the adoption process
That He will supply the funds needed for general needs to purchase food, water, fuel and rent
For prospective adoptive parents and their families traveling to and from Haiti
That HCRM will continue to have clean running water
For the medical needs of the children
For the nannies who take care of the children
For Pastor Fritz and Madame Nicolas, directors of HCRM as well as husband and wife
For the new construction project with Engineer Ministry International (eMI)
For fundraising for construction costs and searches for volunteer labor
For a dump truck to save on delivery fees of construction materials
For volunteers to go and build the boundary wall around the building site for the new orphanage
For Dr. Leininger, who works tirelessly to help HCRM and the children
For Angel Staffing of SA, and the nurses who help at HCRM
For BCFS of SA, who volunteer psychological counseling
For Tracy Herrera, missionary to HCRM
For everyone's safety and health in Haiti
For the people of Haiti
There is a Haitian prayer that says, "Senye, Ala nou kontan se pa nou k'ap kenbe ou men se ou k'ap kenbe nou."... Lord, how glad we are that we don't hold you, but that you hold us. God bless these people and all involved in trying to help them.

Voice of the Unborn (fan page)

Promote Your Page Too 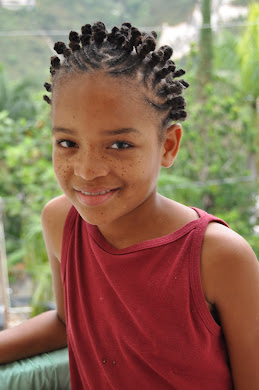 Listen to this playlist: missionchic's Playlist 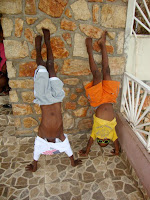 The boys love to do handstands!

January 12th, 2010 at 4:53p.m. the ground in Port-au-Prince, Haiti began to shake. Up in the hills at the HCRM orphanage, just a few hours earlier, Pastor Fritz was planning to go out for the day to visit some of the members of his church and community. His wife told him not to go... she had felt something... a tremble. Thinking it to be nothing, Pastor did not falter in his plan to go to town, trying to comfort his wife as best he could. It was just a few minutes before his departure that he felt it... the tremble. "It sounded like a truck starting in the street below... but then we felt the shake." Looking out over the balcony, down into the city below he says, "I could see this cloud of dust rise from the city." This cloud of dust was the result of Port-au-Prince coming to its knees. Two hundred and forty-five thousand structures ruined... two hundred and thirty thousand dead... one point five million left homeless and alone. What occurred in only a matter of minutes will take decades to rebuild.
Among the one point five million displaced, more than two hundred thousand are just children. HCRM worked frantically after the earthquake to offer a safe haven to the displaced children of the Port-au-Prince area. They even took in some young, pregnant women. One of those women gave birth to her son only a day after the quake had struck. They found a twelve year old boy wondering through the streets, his left arm gone. What had happened to his family? All were killed during the earthquake. How did he live? By the grace of God and the love and sacrifice of his mother. When the quake struck, the boy's mother pulled him under her body, shielding the collapsing building with her body and dying so her son might live. He is now the picture of health, having been tended to by a medical team that came to help, and enjoys playing basketball and shooting marbles with the other boys.
Despite these stories, the earthquake and its death toll is not all that HCRM fights... slavery has become a prominent antagonist as well. Children are taken from the streets, with no where else to go, and brought into households to become slaves. They're beaten, starved, abused and treated more like a dog than a child. Many children are even taken in by their own family members, only to become his or her family's slave. They are given no respect, becoming more of an 'it' than a human being. Children that escape slavery can come to the orphanage for protection, love, nourishment and hope. Many find Christ for the first time, and grow to love Him as they spend time with studies, peers and volunteers. To see their scars, both physical and mental, slowly began to heal with His love and presence is a beautiful sight to behold. What a miracle He has worked in their lives, and by helping HCRM build a larger, safer orphanage, so many more will have that opportunity.

Of Haiti's previous population of 9 million, how many were under 14 years old?